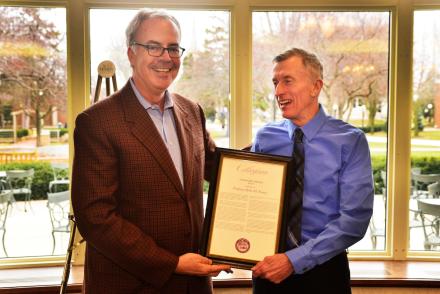 On March 27th, John Neary, longtime Collegium board member and mentor, was awarded the 2017 Visionary Award. Collegium Director, Tom Landy presented him with the citation below at a ceremony followed by a celebration with members of the St. Norbert College campus.

The citation reads as follows:

Catholic higher education depends more than ever on the energy and vision of lay faculty who find imaginative, compelling ways to engage Catholic intellectual and spiritual traditions in the classroom and in their scholarship. Collegium, a consortium of 64 Catholic colleges and universities, was founded to encourage faculty in such creative endeavors.

Professor John Neary, the recipient of this 2017 Collegium Visionary Award, embodies the Collegium ideal. Through his scholarship, teaching, and mentorship he has enriched the lives of his students, colleagues, and Collegium colloquy participants.

John has been part of Collegium for almost a quarter century. He was a faculty fellow in 1994, at Collegium’s second summer colloquy. He was elected to the Collegium Board in 1996, and served for seven years and also served on the Collegium 20th Anniversary Committee. He has served nine times as a Collegium mentor, becoming a mentor to other mentors, famous for telling newcomers that the only way to work well in that role is to be willing to “dive deep.” He has demonstrated many times what that means, and has won the admiration of many participants for his kindness, attentiveness, humility and thoughtfulness. As one of his small group members put it, “the only advice that I would give John is to stay the way that he is. ”

John’s intellectual contributions are worthy of celebrating on their own. In particular, he authored three books that deal with religious themes in literature: Something and Nothingness: The Fiction of John Updike and John Fowles, Like and Unlike God: Religious Imaginations in Modern and Contemporary Fiction, and Shadows and Illuminations: Literature as Spiritual Journey. His work has enriched the field of literary studies, and has enhanced Catholic intellectual life in America.

Just as important to John and to Collegium, he has enriched the Saint Norbert College community through big, public contributions, and countless small interactions. On a campus where mission questions had once proved a source of alienation, John brought faculty together to shine light on a better path forward. In 2000 he co-authored a two million dollar Lilly Endowment grant that enabled the college to pursue creative means to help students think about their life’s purpose, and to help the College reflect on its own purpose in the process.

These contributions were acknowledged when he was honored with The Founder’s Award, “given to employees and students of the college in recognition of their contributions to the Norbertine spirit and tradition on campus.”

Students at Saint Norbert have publicly acknowledged John as “a role model and a compass.” Another affirmed, “John Neary sees the good, the potential in young men and has the capacity and patience to encourage them to reach for and aspire to this potential.” In remarks about his decision to teach at St. Norbert, John once remarked, “I think of teaching as a form of friendship, really, and St. Norbert has allowed me to approach my work that way.”

In recognition of all the qualities of teaching, scholarship and service to the College and Collegium, Collegium is very pleased to present the 2017 Visionary Award to Professor John Neary.

Signup for our Newsletter