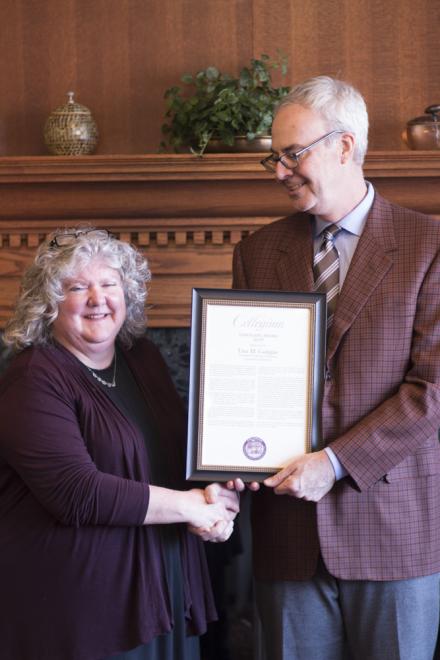 On February 8th, Una Cadegan, longtime Collegium committee member and mentor, was awarded the 2018 Visionary Award. Collegium Director, Tom Landy presented her with the citation below at a ceremony followed by a celebration with members of the University of Dayton campus.

The citation reads as follows:

Una Cadegan, the recipient of the 2018 Collegium Visionary Award, embodies the Collegium ideal. She has helped shape Collegium over the course of 25 years, beginning as a faculty fellow at the first summer colloquy in 1993. Through scholarship, teaching, and mentorship she has enriched the lives of her students, colleagues, and Collegium colloquy participants.

As author of All Good Books Are Catholic Books: Print Culture, Censorship, and Modernity in Twentieth-Century America (Cornell University Press, 2013) she enhanced our understanding of the ways American Catholic intellectuals responded to, and helped shape modern literature and literary culture in the early and mid-20th century.

For more than a decade she convened the University of Dayton’s Forum for the Catholic Intellectual Tradition Today, hosting visiting scholars colloquia and faculty reading groups, helping to select the annual recipient of the Marianist Award for distinguished contributions by a Catholic scholar to Catholic intellectual life, and planning campus events celebrating the award recipients’ work.

She collaborated for many years with Fr. James L. Heft, S.M., to plan and facilitate year-long, university-wide faculty seminars on central issues in the Catholic intellectual tradition. With Fr. Heft she organized two important national conferences, each of which resulted in a published volume. Engineering Education and Practice: Embracing a Catholic Vision was published by University of Notre Dame Press in 2012. In the Lógos of Love: Promise and Predicament in Catholic Intellectual Life was published by Oxford University Press in 2015. She chairs the planning committee for the next interdisciplinary faculty seminar entitled, “What is the university for?” to reflect on challenges faced by Catholic universities in the U.S. today. She has been a lead facilitator for many of the university’s annual mission-based faculty retreats, including the Hiring for Mission Retreat, launched in 2002, and the Second-year Faculty Retreat, launched in 2006.

Finally, Una has contributed to the development of Collegium in important ways. She has served as a mentor at five summer colloquies, was a member of the planning committee for the “Pause at 25” anniversary conference, and presented at that event at St. Catherine University in 2017.

In recognition of all these qualities of teaching, scholarship and service, Collegium is proud to present the 2018 Visionary Award to Professor Una Cadegan.

Signup for our Newsletter