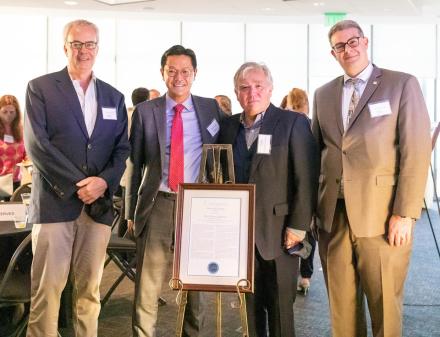 The Collegium Board has awarded José Garcia Moreno (F'19) professor in the School of Film and Television and director of the Academy of Catholic Thought and Imagination at Loyola Marymount University, as the 2021 Visionary Award recipient.

In addition to receiving a framed citation that was read by Tom Landy, José received a $1000 award that can be used for a retreat, in support of relevant academic research and pedagogical development, or for mission-related events on campus. The citation for Jose’s award reads as follows:

The Collegium Visionary Award is meant to celebrate and support the leadership of Collegium alumni/ae in three areas: the advancement of Catholic mission on member campuses, scholarship that advances the Catholic intellectual tradition and brings other traditions into fruitful dialogue with it, and innovative teaching that brings aspects of the summer colloquy to life for students.

José Garcia Moreno, the 2021 recipient of the Visionary Award, embodies the Collegium ideal. A participant in Collegium’s 2019 summer colloquy, he captured the attention of Collegium mentors and participants for his dedication to integrating Catholic spirituality in the artistic realm, his embrace of the sacramental imagination, his attentiveness and ability to draw connections, the way he sees beauty in the world, and his desire to foster conversations that link spirituality, science and the arts. As one mentor put it, he is not only a beholder, which is a core aspiration in the Collegium community, but a cultivator of that disposition in others.

Garcia Moreno’s education has taken him from Mexico’s Universidad Iberoamericana to Charles University in Prague to UCLA. His animated work has been featured and celebrated in film festivals around the world, earning prizes at La Habana, Toronto, San Francisco, Mexico, Montreal, and Japan, and he is recipient of a number of prestigious awards and fellowships. As practitioner and professor of animation his work has ignited the imaginations of students, colleagues and the public. As the Director of ACTI, the Academy of Catholic Thought and Imagination at Loyola Marymount University, he has worked to build a community of shared inquiry and exploration and has been eager to venture deep into history, science, scholarship and creativity.

Shaped by the Second Vatican Council and inspired by Pope Francis’ encyclical, Laudato Si’, he brings, as one colleague put it, “the heart of a believer and the eye of an artist to all that he does as a teacher, scholar, animator and filmmaker… He is a visionary in the way that we speak of the great mystics as visionaries: he is able to see beyond the mundane and the material in front of him to the world of the spirit that suffuses and animates everything around us. Like Saint Ignatius he finds God in all things, and not just in the beautiful and the good; he has also discovered the Catholic spirit and imagination at work in the miniature, the paradoxical, the discarded, and the monstrous,” all subjects of recent programs sponsored by ACTI.

To take fragments of raw materials and fragments of ideas, to turn the efforts of a capacious heart and imagination into an object of beauty, is to participate fully alongside the Creator as a maker, as a human being fully alive. We celebrate the many ways Professor Garcia-Moreno has contributed to the venerable via pulchritudinus—the way of beauty—a sure path to the Author of all beauty. In recognition of his commitment to living out Collegium’s mission as a mentor, colleague, teacher, and artist, Collegium is pleased to present the 2021 Visionary Award to José Garcia Moreno.